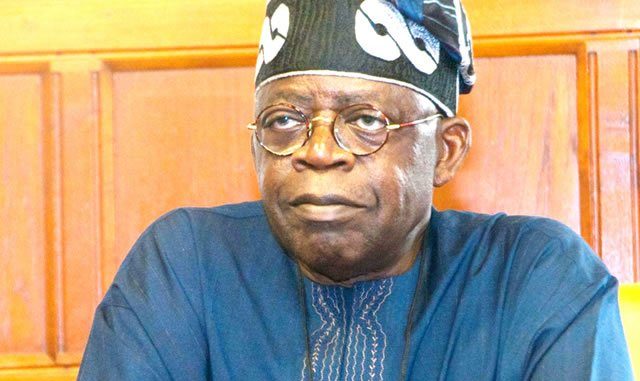 When considering the behaviour of a clever schemer like Bola Tinubu, you’ll hardly take his recent position on the 2023 presidential race so serious. Almost every newspaper went with the rider that suggests Tinubu is yet to make up his mind on whether he will contest for president in 2023 or not. Headlines like “I have not decided on the 2023 presidential race” filled the space and kept a multitude of his supporters in suspense.

Sure, Tinubu, like any Nigerian politician of his standing, will most certainly have his eyes gazed at the highest political office in the country, but there are many hurdles to cross to gain the seat. While Tinubu could be regarded as exceptional in political maneuvering and enjoys a seamless role as ‘godfather’, it is entirely a different ball but when it comes to the presidency.

And that was what played out in the recently held National Executive Council (NEC) meeting of the APC, where a strong message was passed on to the former Lagos state governor. A lot has been said on NEC’s decision to adopt the proposal of President Muhammadu Buhari, especially on the dissolution of the party’s National Working Committee (NWC) and how it has some undertone on the 2023 presidential permutations and the bearing on Tinubu’s aspiration.

At the height of insinuations, Tinubu came out and as usual, acted as if all is well, and even distanced himself from any talk that has to do with the 2023 presidential race. The APC chieftain dismissed speculations on his presidential aspiration and noted that contrary to insinuations, he is yet to decide on whether or not he will seek the country’s top political office in 2023.

“To those who have been actively bleating on how the President’s actions and the NEC meeting have ended my purported 2023 ambitions, I seek your pity,” Tinubu noted in a statement, noting that insinuations out there painted a “colourful epitaphs to the 2023 death of an alleged political ambition that is yet even born.” Pushing hard to sell his narrative, Tinubu said his focus at the moment was on health and economic challenges facing the country and not presidential race as being speculated.

But that is not the picture that the struggle for control in APC sent out and typical of Tinubu, as I observed in a previous article entitled “2023: Tinubu and his mind game”, the former Lagos state governor seems to have masterminded the art of manipulating people’s imperfect reasoning and emotions. That is why he believes he could sell a different narrative to the public when the truth is well obvious to any discerning observer.

On the surface, the dissolution of APC’s NWC was to put an end to the confusion on who should replace Adams Oshiomole after the Court of Appeal upheld his suspension as chairman, but looking deeper will reveal a lot, and that the source of wranglings in the ruling party is linked to positioning for 2023 presidential race. Oshiomole is a known long-time ally of Tinubu, and for the entire time that his leadership of the APC lasted, most of his actions and inactions were calculated to position the former Lagos state governor in firm control of the party’s structure.

Last month, those not favourable to Oshiomole’s style of leadership saw an opportunity when an appellate court pushed him aside and capitalized on the controversy that came after it, to do away with the entire NWC, most of whom are reportedly converted Tinubu loyalists. Evident enough was Bashir El-Rufai’s tweet shortly after NEC dissolved APC’s NWC that “No sole individual should ever be allowed to control a political party that takes itself seriously.”

Bashir is not just an APC member, but one of the sons of Nasir El-Rufai, Kaduna state governor, who happens to be a fierce rival of Tinubu in APC, and confirmed what many have interpreted to be the outcome of the party’s NEC meeting. Though not specific, the Director-General of the forum of APC Governors, Salihu Lukman, said Buhari’s action at NEC shows he’s in charge and “freed himself from all the leaders who were the problem.”

From every indication, the walls are closing in on Tinubu and he must be getting the message. The only question is whether he will be able to maneuver his way again and retake the control of APC, which he has strenuously disguised as the right thing for the party.

But the tide is changing faster and going by the outcome of the last NEC meeting, Tinubu is losing ground in APC and his presidential aspiration is at a distressing point. As a politician, he can pretend to make his supporters believe everything is well but that picture of resistance is nothing but imaginations. The thing, however, is that things can only get worse as days go by.

Tinubu had problems with his ambition, though, he has been doing everything to deny it. From the look of things, the former Lagos state governor has lost considerable support. The bloc in the progressive that is opposed to him turned out to be bigger forces and as now, these bigger forces would weigh on who gets the APC ticket eventually. This has left him stranded and I am sure he would have already gotten the message.

Written by Oke Umurhohwo, a Political Analyst and Strategist. He tweets via @OkeStalyf and can be reached via oke.umu@gmail.com Everyone Has It, Except You, Is Not A Curse

THE FORCE OF LOVE

WHAT “I LOVE YOU” REALLY MEANS