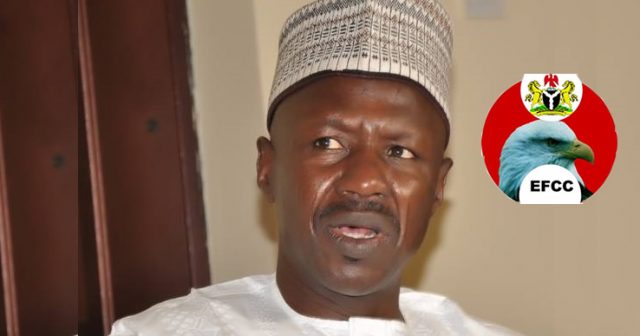 Some policemen attached to the Force Criminal Investigation and Intelligence Department on Tuesday searched the home of the suspended acting Chairman of the Economic and Financial Crimes Commission, Ibrahim Magu.

The policemen searched Magu’s house located on Abduljalil Street, Karu Site, on the outskirts of Abuja, for several hours and made away with vital documents.

The policemen who carried out the search were said to be the same ones who arrested Magu on Monday.

The officer said, “On Tuesday evening, a team of policemen stormed the home of Magu in Karu. That is the house where Magu used to live before he moved to Maitama after his appointment as EFCC chairman.

“The policemen made away with some items and everything will be processed as investigations continue.”

Meanwhile, it was learnt that Magu was detained for a second day after answering questions from the panel for over five hours on Tuesday.

He was subsequently taken into custody again at about 7pm.

The Police investigation was ongoing simultaneously with that of the panel.

“As the panel makes it findings and establishes certain allegations, the police will continue to open investigations. We were told that he had bought some properties, so one of the reasons we searched the Karu home was that we wanted to lay our hands on some of these documents. We have been able to make some findings,” he said.

Meanwhile, it was learnt that Magu may be brought before the Force Disciplinary Committee made up of deputy inspectors-general of police for trial and possible dismissal.

A top security agent said since Magu is a Commissioner of Police, he cannot be charged until he is properly dismissed from the police.

He said, “After the panel has finished sitting and once Magu is found wanting on any of the 24 allegations, he would be made to face the Force Disciplinary Committee which comprises the DIGs. The committee would make a recommendation to the IG who would in turn forward the report to the Police Service Commission. The PSC would then do the needful.

“Magu already has an existing disciplinary case in his police file. So, as a second-time offender, dismissal would be very easy.” YOU CURSE YOURSELF DAILY WITHOUT KNOWING

N-power Portal Not Hacked, It Is Secured ― FG