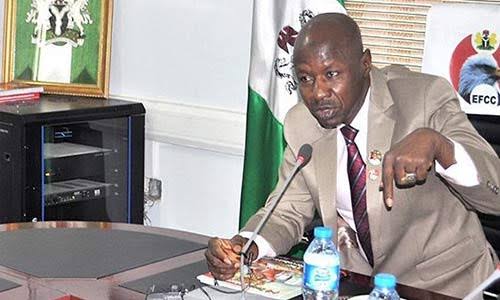 The presidential panel investigating graft allegations against embattled acting Chairman of the Economic and Financial Crimes Commission (EFCC), Ibrahim Magu, has given him two days to consult his lawyers.

The panel reportedly granted Magu the opportunity “when his responses to the allegations were incoherent,” a security source told Daily Sun yesterday.

For the third day in a row, Magu faced the panel sitting at the Banquet Hall of the Presidential Villa, Abuja, to account for his stewardship at the EFCC since November 2015. Among other allegations, the probe panel asked the EFCC boss to account for the specific number of properties recovered by the commission under his watch and what happened to them, the locations of the recovered property, how they were sold, whether the sale process(es) followed due process and the present state of those still in the commission’s custody.

Said the source: “From some of his submissions before the committee, he could not account for the exact figure of the assets in EFCC custody and what has even become of them. Even for the ones sold, he was incoherent when confronted with details of their disposal.”

The panel, it was further gathered, asked Magu if the bidding process(es) for the sold assets were advertised in national newspapers, as required by law, the short-listing process(es) and whether other government agencies were involved in the sale process(es) and also, whether the Presidency, through the Office of the Attorney-General of the Federation, was notified and involved in the disposal of looted assets, and “he was not coherent in his reply to these allegations.”

This reportedly prompted the probe panel to give him “two days to meet with and present his defence lawyers from Lagos,” according to report monitored by the News Agency of Nigeria.

The committee chaired by Justice Ayo Salami (retd), decided to give Magu the opportunity of “legal counsel,” as the “allegations against him are weighty.”

A Presidency source had on Tuesday told State House correspondents that Magu was suspended from office following the ongoing investigation by the presidential panel.

Since Monday night when he was invited to appear before the panel, Magu has been spending the night at the FCID. BUILD YOUR RELATIONSHIP ON TRUST

DON’T MARRY SOMEONE YOU KNOW