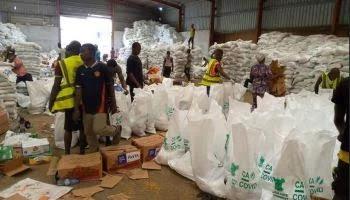 At least six people are feared killed on Friday evening after Nigerian security forces opened fire at a warehouse holding relief materials for the coronavirus pandemic.

Two witnesses said the violence along the airport road has gripped the Kwara capital. Witnesses said soldiers and police officers were amongst the security agents that opened live rounds at the warehouse after being called in by state authorities.

A spokesman for the police in Kwara did not immediately return a message seeking comments.

It came as COVID-19 warehouses are being detected in Lagos and other parts of the country, prompting citizens to besiege and loot them.

The palliatives were meant for the people worse hit by the pandemic, but some government officials have kept them in secret facilities in an apparent scheme to resell for personal financial gains. LEARN TO BE THANKFUL TO YOUR EX

HOW TO HANDLE DISAPPOINTMENT IN RELATIONSHIP

DIFFERENCE IN LOVE AND MARRIAGE